Trapped in the body of an iPhone 8, the 2020 “Special Edition” iPhone shelters none other than Apple’s latest processor, the A13 Bionic. In return, the flagship SoC (system-on-a-chip) gives its host many of the same capabilities as the costly iPhone 11 Pro, and all at a much lower price point. However, unlike the 11 series, the iPhone SE (2020) does not boast of any kind of specific audio capabilities. Before we took it for a spin in our Audio lab, all we knew was that the phone records videos in stereo, integrates two speakers, lacks a headphone jack, and doesn’t provide any kind of adapter — “no strings attached”!

We put the iPhone SE (2020) through our rigorous DXOMARK Audio test suite to measure its performance both at recording sound using its built-in microphones, and at playing audio back through its built-in speakers. In this review, we will break down how it fared in a variety of tests and several common use cases.

Apple’s iPhone SE (2020) achieved an overall audio score of 70 — that’s right behind  the iPhone 11 Pro Max, and one point ahead of the Dolby/AKG-boosted Samsung Galaxy S20 Ultra.

In Playback testing, the phone delivers well-balanced midrange and treble, precise attack, and few artifacts overall. Unlike the vast majority of smartphones, the speakers allow dynamic content to express all its musical nuances, even at minimum volumes. At maximum volume — noticeably lower than other high-end phones — compression remains subtle and dynamics are well preserved, but heavy distortion artifacts can appear. In addition, tonal balance lacks low-end extension, while left and right channels are inverted when playing back music in landscape mode — a peculiar characteristic of devices from Cupertino. 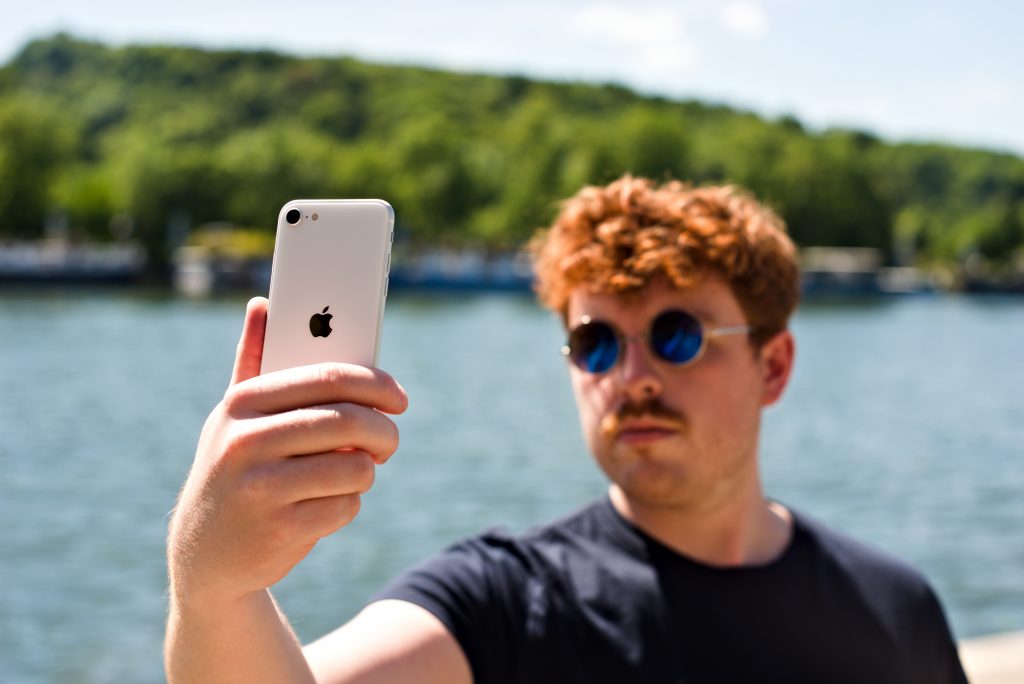 With an excellent recording score of 73, Apple’s Special Edition delivers a first-rate recording performance, consistent across all use cases. Its excellent tonal balance and timbre reproduction allow good dynamics and spatial reproduction. Very few spectral artifacts (such as distortion) are noticeable, even when recording in loud environments, and microphone occlusions are well controlled. That all said, some temporal artifacts are still an issue (slow automatic gain control, pumping on vocal content at high SPL), loudness is considerably lower in meeting room recordings, and frequency response slightly lacks low- and high-end extension.

The DXOMARK Audio overall score of 70 for the Apple iPhone SE is derived from the Playback and Recording scores and their respective sub-scores. In this section, we’ll take a closer look at these audio quality sub-scores and explain what they mean for the user.

The iPhone SE 2020 delivers a decent Timbre performance, with a good reproduction of midrange frequencies (mids) and a consistent tonal response when watching movies. However, the lack of high- and low-end extension is perceivable, impairing both the sound’s foundation and definition when listening to music as well as playing games. At maximum volume, midrange and high-end resonances impact the overall tonal balance.

Our Dynamics tests measure how well a device reproduces the energy level of a sound source.

Attack is well preserved, especially in movies and games.

The iPhone SE (2020) shows fairly good spatial performance, thanks to precise distance reproduction and localizability of sound sources. In landscape mode, the wideness of the sound field is very satisfying, especially compared to similar-sized devices. 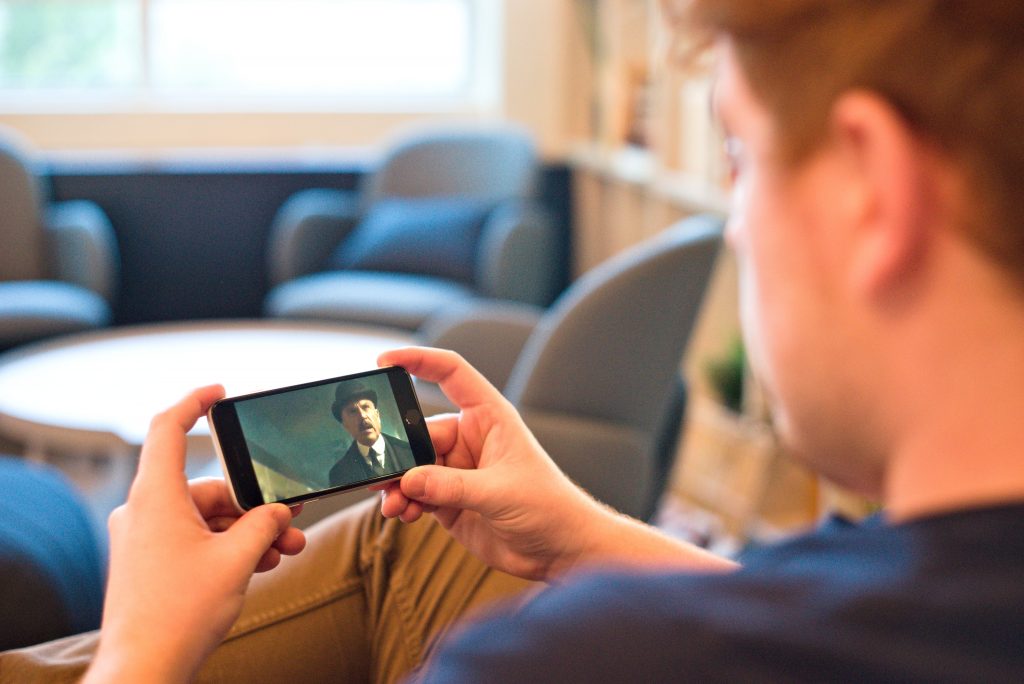 Audio played back through the Apple iPhone SE’s speakers is shifted slightly to the side of the device due to uneven output levels, and just like we noticed on the iPhone 11 and 11 Pro Max, left and right channels are swapped when using Apple’s Music app in landscape orientation.

Our Volume tests measure both the overall loudness a device is able to produce and how smoothly volume increases and decreases based on user input.

Unlike its competitors, at minimum volumes, the SE’s speakers allow every bit of high dynamic content to remain intelligible. Furthermore, level increase and decrease is consistent across all volume steps.

However, maximum volume is noticeably lower than that of most high-end devices. Here are a few of the objective measurements we carried out in our laboratories, using recordings of both hip-hop and classical music played at the maximum user volume step:

Our Artifacts tests measure how much source audio is distorted when played back through a device’s speaker. Distortion can occur both because of sound processing in the device and because of the quality of the speakers.

As evidenced by the phone’s remarkable score of 86, audio played back through the SE’s speakers suffers from very few artifacts. Temporal artifacts are almost absent — not even noticeable at loud volumes. As for spectral artifacts, they certainly remain discreet at nominal volumes, but less so at maximum volumes: heavy distortion manifests when approaching the speakers’ limits.

Compression is subtle, even at loud volumes.

While playback audio is clean at soft and nominal volumes, distortion is audible at maximum volumes.

The Music app’s noise enhancement is audible during the silent parts of audio tracks, and significant latency occurs when pressing the Play/Pause button. Finally, when playing games, the user has to pay attention to the position of their fingers, as the bottom speaker is easily occluded.

With the highest sub-score we’ve seen so far in this category, the iPhone SE (2020) delivers an outstanding tonal response, edging out Honor’s V30 Pro by one point. Its performance shows excellent consistency across all scenarios (electronic concert, life video, selfie video, meeting room, and memo) and frequency ranges (bass, mids, and treble). It fares particularly well in loud environments, such as concerts, as tonal balance is well preserved and suffers from very little distortion (see Artifacts below). However, there is a slight lack of extension at the lowest and highest ends of the frequency spectrum, and the global tuning focuses mainly on midrange frequencies.

When it comes to audio recordings, Apple’s iPhone SE delivers one of the best dynamics performance we’ve evaluated to date. The previously-mentioned excellent tonal reproduction ensures that the signal-to noise ratio and the sound envelope are well preserved in every recording app, even in high-SPL scenarios. Vocal plosives (such as “p” and “b”) and instrumental attacks are also well reproduced, thanks to proper treble tuning and very few artifacts.

The spatial sub-score is mainly impaired by the Memo app’s mono recordings, which results in poor localizability and non-existent wideness. Apart from that, wideness and localizability are fairly good in life and selfie videos. Overall, distance is very well reproduced — even more so in meeting room situations — thanks to a proper vocal tonal balance in every app. Curiously enough, landscape videos are sometimes recorded in portrait mode, using the audio tuning for selfie videos.

iPhone SE recordings boast excellent loudness in high-SPL environments, along with a good performance in videos and memos. 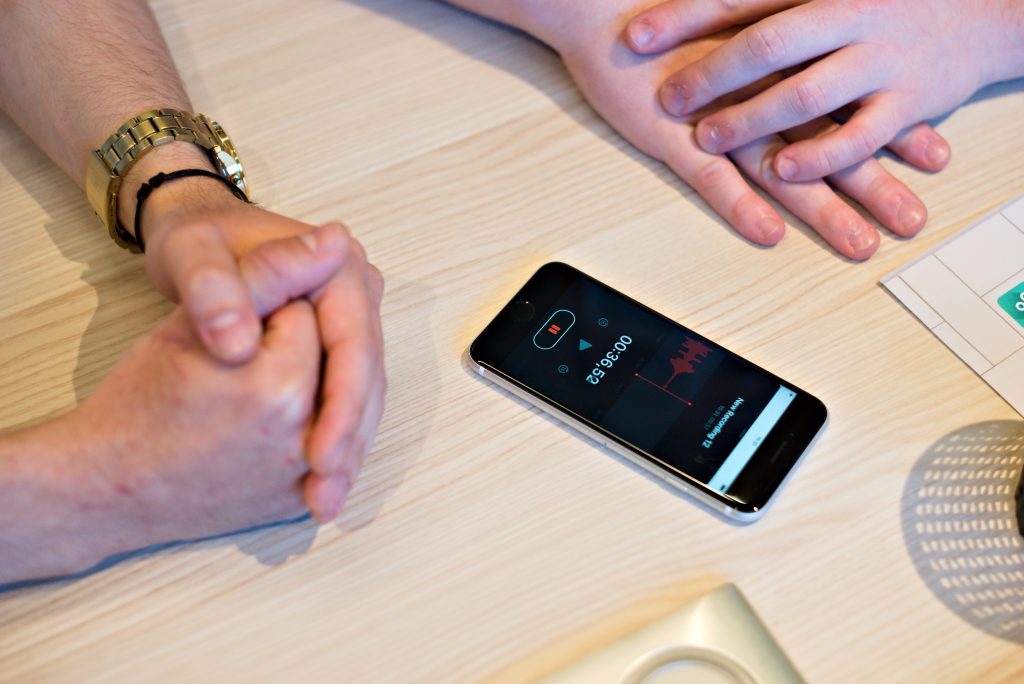 Meeting room recordings could be louder

Meeting room-type recordings could be a little louder, however. Here are our test results, measured in LUFS (Loudness Unit Full Scale); as a reference, we expect loudness levels to be above -24 LUFS for recorded content:

With a sub-score of 77 in the Recording Artifacts category, the iPhone SE is tied with the Honor V30 Pro. Apple’s less-expensive alternative delivers an excellent performance for spectral artifacts, thanks to very rare noticeable distortions, even in loud environments. 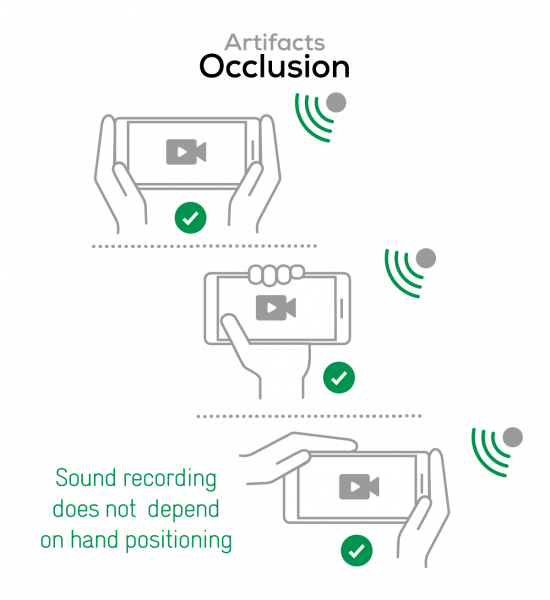 Distortion is well controlled, even when recording in loud environments.

On the other (temporal) hand, still in high-SPL scenarios, the slowness of the automatic gain control is fairly obvious, and occasional pumping can be heard on loud vocal content. Finally, finger noises are well reduced when recording videos, which results in very rare occlusions.

Thanks to very few artifacts and a very good tonal balance — and despite its slight lack of high- and low-end frequency response — the iPhone SE delivers good background recordings.

In playback, the iPhone SE (2020) delivers a good overall performance, with precise attack, few artifacts, and well-balanced midrange and treble frequencies. Curiously enough, as with the iPhone 11 and 11 Pro Max, the stereo channels are inverted when audio is played back through the Music app in landscape mode.

In the recording area, Apple’s Special Edition ranks second-to-best, just below Honor’s V30 Pro, thus outshining its Cupertino siblings in almost every category. This admirable performance is due to an outstanding timbre performance, very few artifacts, and excellent dynamics. As there’s always room for improvement, however, note that this budget-minded iPhone’s recordings still lack a bit of high- and low-end extension, and exhibit a few temporal artifacts.